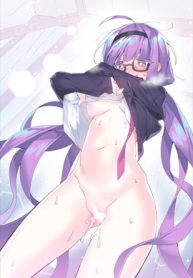 Nam-ju, who lived normally by daytime at a convenience store and playing games at night, accidentally picks up a USB on the street. There is a fantasy virtual reality adult game that has not been released officially for some reason… This game, NPCs are in a strange state?! Can male-ju truly appease the estrus (?) NPCs and capture the tricky heart of the Demon King?