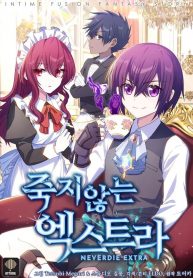 In the smash hit game, [Demon War 3], there are ‘extras’ that die every day in all sorts of ways. But despite not contributing the slightest bit to the game, an extra named Evan D. Shelden has a death scene with exclusive computer graphics that stole the love of the production team! Damn it, isn’t that the name I received when I was reincarnated into this game world? I, someone who isn’t the main character and an extra who has too many deaths to count, must survive at all costs!