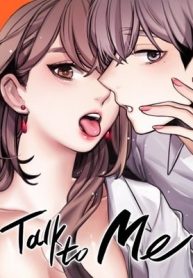 Talk to Me Manhwa also known as (AKA) “톡투미 /トーク・トゥ・ミー”. This OnGoing Manhwa was released on 2016. The story was written by Eunbyul and illustrations by Eunbyul. Talk to Me Manhwa is about Adult ,Comedy ,Josei ,Romance ,School Life ,Smut

Everyone considers me the purest girl to ever walk this planet.
I’m viewed as the girliest of girls and no one dare thinks I would think about anything naughty.
But that isn’t always a good thing.

The Voice of God